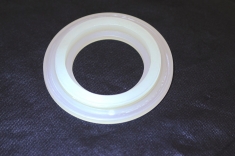 Polypropylene (PP), also known as polypropene, is a thermoplastic polymer used in a wide variety of applications. It is produced via chain-growth polymerization from the monomer propylene.

Polypropylene belongs to the group of polyolefins and is partially crystalline and non-polar. Its properties are similar to polyethylene, but it is slightly harder and more heat resistant. It is a white, mechanically rugged material and has a high chemical resistance.

Polypropylene is the second-most widely produced commodity plastic (after polyethylene) and it is often used in packaging and labeling. In 2013, the global market for polypropylene was about 55 million tonnes.